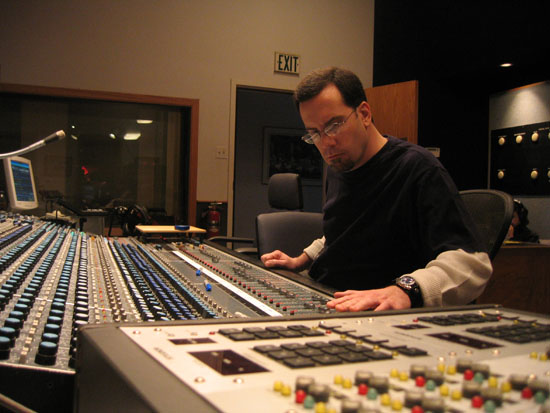 Mark Cross is an award winning Producer, Composer, Mixer, Educator and Author with an extensive discography in both film and television that spans over 2 decades.

As a Engineer / Mixer Mark has worked on numerous albums, film scores, and television episodes, including the Grammy-winning “I Am Shelby Lynne”, Randy Newman's Oscar-nominated and Grammy-winning “CARS” and “Meet the Parents” score and soundtracks, along with mixing hundreds of episodes of the NBC prime time series: ER. Additional film credits include: Alien Resurrection, Seabisquit and Beavis and Butthead Do America.

As a composer Mark has created over 1,000 registered tracks in use in hundreds of films and television shows worldwide. He was the lead composer for the NBC Prime Time Series: Last Comic Standing as well as contributing additional music for: American Idol, Curb Your Enthusiasm, The CBS Evening News, HBO’s: Getting On and Comedy Central’s: Key and Peele. Mark has created musical themes for Nickelodeon's Wow Wow Wubbzy, the Seinfeld Season 8 DVD, as well as producing and performing with Grammy winner John Legend on HBO's: Curb Your Enthusiasm.

As an educator Mark is a faculty professor at California State University Northridge and Berklee College of Music On Line teaching Composition for Visual Media, Audio Post Production, and Music Technology. He studied at Berklee College of Music earning a Bachelor of Arts in Music Production and Engineering and a Bachelor of Arts in Music Education. Further studies include Boston University anticipating a Masters Degree in Music Education in 2016.

“Audio Post Production for Film and Television”. This introduction to audio post production is based on his vast and diverse background along with the input and experience of numerous A-list industry professionals and addresses all aspects of working with dialogue, music and sound effects for film and television. Many of these professionals and institutions recognize this textbook as the “essential” book for anyone interested in studying audio post production.

The Magic of Film/TV Sound: An Interview with Mark Cross  (by Jonathan Feist - Berklee Press)